Our getting ready for bed routine includes bath time, which I am sure is normal for most households. In the cooler weather we let it slide here and there. These days, the boy get so sweaty and dirty, there is no way they can miss their time in the tub.

Tonight I tried to steal away into the shower. I felt exceptionally gross tonight. K was going to give the boys a bath while I got cleaned up. Peanut didn’t think that was such a great idea and managed to get himself into the bathroom and climbed into the shower fully clothed. I had turned the water on to get it ready and hadn’t even climbed in yet myself. I had to laugh. I got him undressed and he played under the water while I got myself cleaned up.

After the shower he had to brush his teeth. He tries real hard to spit in the sink. It is really cute to watch.

Then he had to sit on his potty. He isn’t actually doing anything on the potty yet. He is just familiarizing himself with it. He will come in and sit on it while one of us is using the bathroom. Of course most of the time he is fully clothed. He sits down and makes ssssssss noises because that is what I do. I tell him to sit on his potty and go pee-pee and then I make the sssssssss noise. So, that is what he thinks he has to do, lol. He insists that he needs to have a piece of toilet paper to wipe himself too. Seriously cute.

Then it was Munchkin’s turn. He decided that he would have a shower too. He insisted that he had to do all of it himself. He would not let K touch the water or help him wash up. As result, he took a cold shower, but he was so pleased that he did it all by himself. He even used K’s body wash to wash his hair. As matter of fact, it is still in his hair. . . .I’ll have to have him hop in the shower in the morning to finish rinsing it out. He so gets an “A” for effort tonight 🙂

I nursed Peanut to sleep on the couch tonight and transferred him to the bed seamlessly. He slept through the night again last night. I wonder if he will tonight.

Munchkin is currently snuggled with K under a blanket on the couch. He is waiting for Dada to come in to help him brush his teeth and take him to bed.

I will leave you with a picture of Peanut passed out on the boy’s Spiderman couch. He took his nap there yesterday. 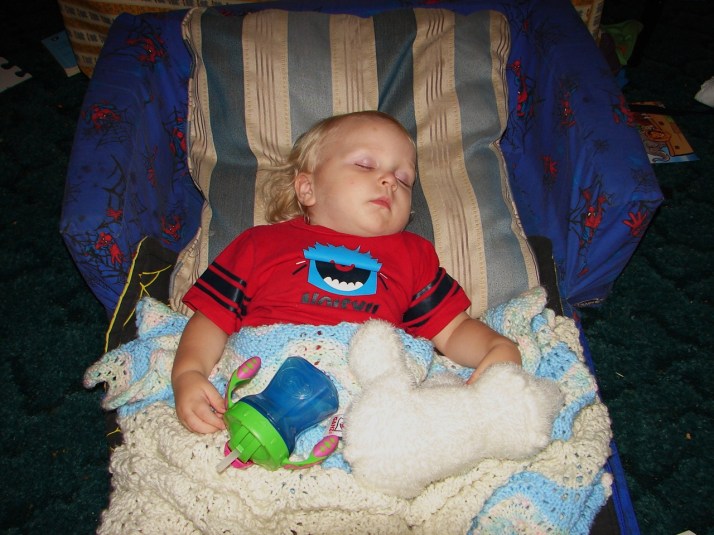 Check out some other awesome blogs

Click on a word, see where it takes you.